There are many different applications for a flat film made of polyethylene.

Bulky furniture and machinery can be protected from dirt, dust, and moisture using flat film.

These goods also need protection during transport – something that the film is also well suited for.

A flat film is packed as shrink film around foodstuffs to protect them from contamination. 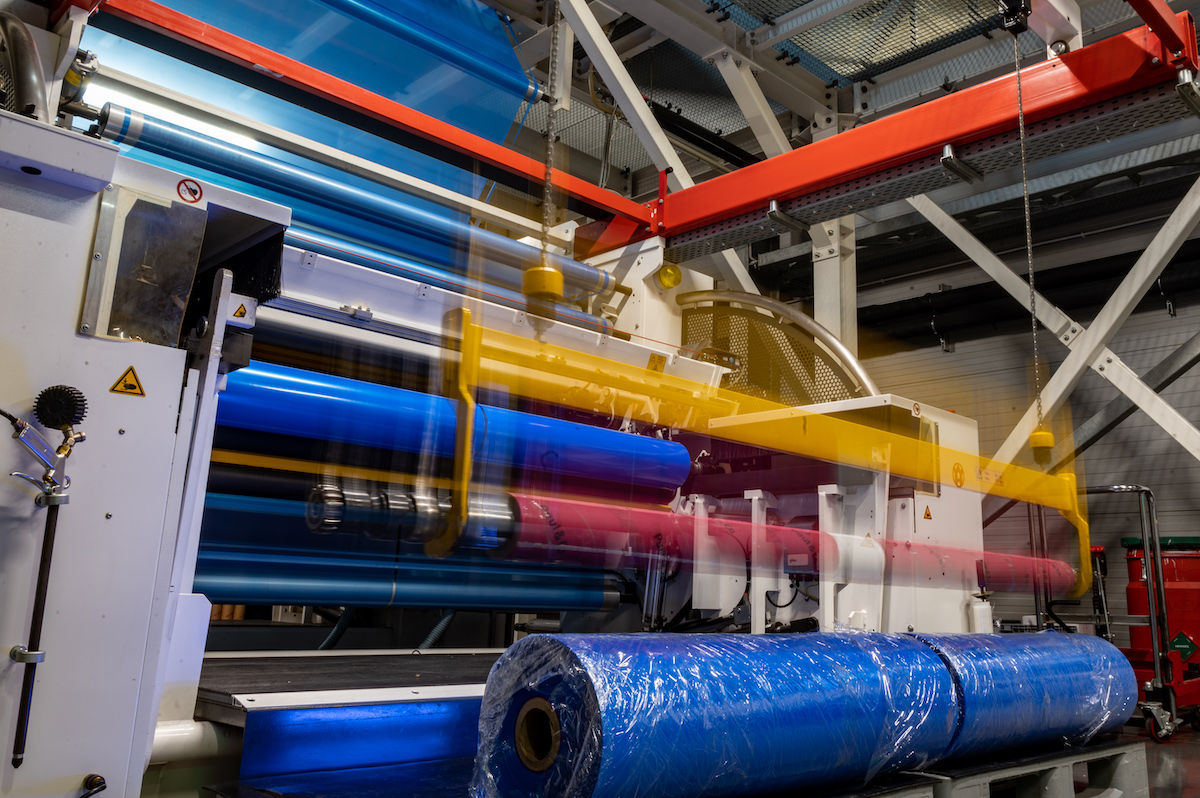 Petroleum and natural gas monomers are synthesized to form larger units called polymers. Polymers are then joined together to form larger structures (polymerization), and the resulting product is called polyethylene. LDPE (low-density polyethylene) is formed using high pressure, whereas HDPE is produced through a low-pressure process. Following that, the polyethylene is made into a liquid and forced through a sieve. When the structure is cold, it is cut into granules, which are then heated again.

In the so-called extruder, a homogeneous mass is formed. Now is the time when certain additives can be mixed into products. Antistatic, UV-resistant, or even colored film can be created during this step.

Next, the manufacturing process splits into blow extrusion and cast film extrusion. In blow extrusion, the compound is transformed into a tubular film – the compressed air blows the molten granulate through a ring die, and a tube is formed. After the tube has cooled, it is cut open at the side, and the end product – tubular film – is carried over several rollers onto a roll.

Films are mainly made of polyethylene as this material can be easily formed (polyethylene belongs to thermoplastics). Polyethylene floats in water and is physiologically harmless because it burns without leaving residues.

How Environmentally Friendly Is a Flat Film Made of PE?

Plastic does not have a good reputation. This is understandable, as it is made from crude oil and natural gas – both of which are non-renewable resources. It can take several hundred years for a PE film to completely degrade. On the other hand, products made of PE film are durable and can be 100% recycled. Polyethylene burns without leaving residues and without creating toxic fumes. The production of PE film consumes less energy than the production of paper.

If products made of polyethylene are disposed of properly, they do not represent a huge burden on the environment. Disposal is done through yellow bags or yellow garbage cans. After things made of pure PE have been recycled and turned back into new PE goods, they can be incinerated at the end of their ‘life’ without leaving any residue.

Many types of plastic can be pressed or cast into a more or less thick flat film, such as polyethylene (LDPE, LLDPE, MDPE, and HDPE).

Flat films of various thicknesses are particularly suitable when it comes to wrapping large objects (machines, bulky furniture, and other items) and protecting them from dirt, dust, and moisture. The films also offer excellent protection when transporting packaged goods. Flat films in the form of shrink films are perfect for protecting food from contamination.

Flat films are stored as a continuous product on rolls. There are specialized machines that wrap a flat film around the packaged product. The processing of flat film is highly automated.

Almost all plastic grades from which flat films are made are also suitable for the production of other films (e.g., semi-tubular films or tubular films).

The application depends on the plastic used to manufacture the films. Those made of polyethylene are food safe – they do not leave any marks on the packaged goods. PE films are also very flexible and, due to their thermoplastic properties, shrink well. That makes them ideal for baked goods, pasta, and other foodstuffs.

Polyethylene films are also successfully used in the non-food sector. The characteristics of the flat film can be changed according to customer requirements. Color, dimensions, and even thickness are almost freely definable. In some cases, it is necessary that the product moves freely in the film, and sometimes exactly the opposite is expected from the packaging material. Both are possible with PE flat film. Shrink film fits protectively to the packaged product.

Stretch films, shrink films, bubble films, as well as semi-tubular and tubular films are often used in certain niches, whereas flat films are highly versatile. A flat film is also available as a double flat film (slit on both sides and wound open).

No, flat films are non-toxic. This makes them ideal for food packaging, as they do not contain plasticizers or other substances dangerous to humans.

Yes, a flat film is not only waterproof but also very robust.

What is the difference between PE and PP?

Polypropylene is more durable than polyethylene. If you can scratch the plastic with your fingernail, then it is PE and not PP.

Can flat films be glued?

Yes, you can glue flat films, but it is not possible with every adhesive. You need special hot glue sticks or a 2-component adhesive for this.

The film used for food packaging is always polyethylene (PE). PVC is used exclusively in the non-food sector. PVC is more resistant to acids, bases, oils, and alcohol.

What about the cold resistance of polyethylene?

Is PE insensitive to solar radiation?

No, flat polyethylene films are not UV resistant. PE film must be dyed black or equipped with UV protection to withstand solar radiation.

Yes, all polyethylene products are combustible and burn without residue.

Can polyethylene be recycled?

Yes, an old PE film is recycled back into a new one.

How do I recycle flat film and other articles made of PE?

Foils, bottles, bags, and other items made of polyethylene can be disposed of in yellow bags and yellow garbage cans.