A semi-tubular film can be defined as a tube-shaped PE film that has been cut open on one side. Films made of LDPE, LLDPE, MDPE, or HDPE are extruded as tubular films and then further processed into semi-tubular variations or other products.

In addition to semi-tubular films, PE blanks and finished articles (i.e., bags and pockets of all kinds) can be made using additional manufacturing processes.

The manufacturing process by which semi-tubular film is produced is called extrusion. Here, PE granules are melted and blown under pressure to form a film tube – which is then cut open on one side.

The semi-tubular film is supplied by Krus in rolls that fit into most common packaging machines.

Ask us about special equipment for your semi-tubular film – we can protect the film against sunlight or even dye or print it. 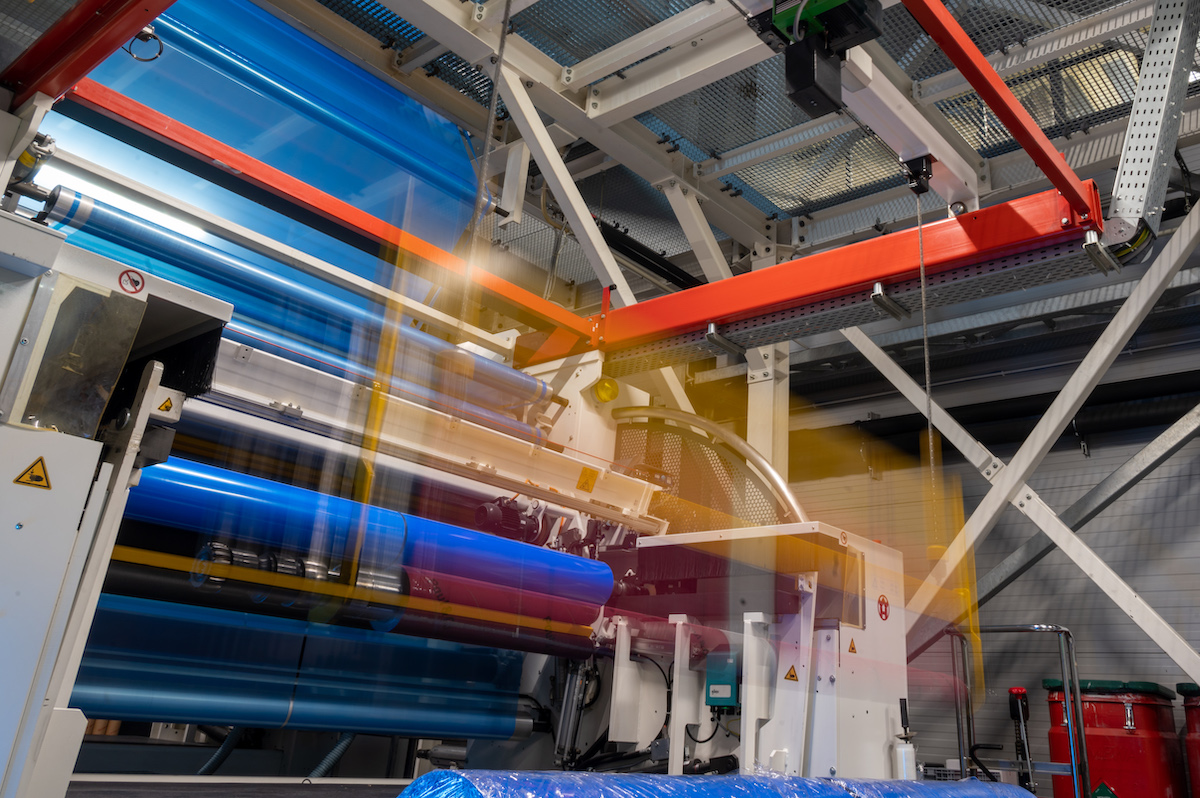 How Is Semi-tubular Film Different From Other Films?

The semi-tubular film has a slit. It is a folded flat film that can be used in many ways – for example, the furniture industry uses such films to protect chairs and other articles from dirt and dust. Semi-tubular films are also used in the food, textile, and pharmaceutical industries and are among the most widely used films made of PE.

The opening in the tube allows the film to be easily slid over the goods to be packaged. A protective wrapping for clothes, medicines, electronic goods, and furniture, the semi-tubular film is available in different qualities and can be designed according to your wishes.

In order for your project to succeed, you need to consider a few things when using semi-tubular film – we are happy to discuss them with you personally. Edge trim, core diameter, and other details must be taken into consideration during the packaging process.

Trust our knowledgeable consultants and make an appointment to discuss your film needs!

What Material Is Used for the Production of a Semi-tubular Film?

Contact us to get competent advice and learn which material is best suited for your purposes. Packaging is often exposed to strong mechanical challenges during transport. In order for your goods to reach the customer undamaged, they must be professionally packaged.

Semi-tubular Film – Adapted to Your Needs

The semi-tubular film is transparent unless it is colored on request. This allows your goods to be seen through the film, which is useful for warehousing and for the end consumer.

Of course, we can also print the semi-tubular film for you. The possibilities go far beyond article information and a logo – your imagination is the limit here.

You can also determine the width and strength of your film and how many meters should be on a roll.

Pure PE film can be used for food packaging because it is non-toxic and made for food use. The semi-tubular film can also be used for packing frozen goods, as it is suitable for cold temperatures.

An antistatic agent prevents the bags from sticking and is recommended if you want to use the films in a vending machine.

PE film is sensitive to sunlight. However, UV resistance can be achieved through additives in the granulate. Thus, your semi-tubular film should be safe from sunlight for a long time.

No, semi-tubular films are non-toxic. They are excellent for food packaging, as they do not contain plasticizers.

Yes, a semi-tubular film is waterproof and very durable.

How can I tell the difference between PE and PP?

Polyethylene is softer than polypropylene. If you can scratch the material with your fingernail, it is PE and not PP.

Is it possible to glue semi-tubular films?

Yes, it is possible. Semi-tubular films made of PE can be glued with special hot glue sticks as well as 2-component adhesives.

Polyethylene (PE) is used In the field of film production. On the other hand, PVC (polyvinyl chloride) is mostly used in the non-food sectors. PVC is more resistant to acids, bases, oils, and alcohol. Semi-tubular films made of polyethylene are very suitable for use in food packaging.

Is polyethylene resistant to low temperatures?

Is PE insensitive to solar radiation?

Yes, all PE materials are combustible.

Yes, PE film can be recycled back into a new PE product.

How do you recycle semi-tubular film and other items made from PE?

Films, bottles, bags, and other items made of polyethylene can be disposed of in yellow bags and yellow garbage bins.